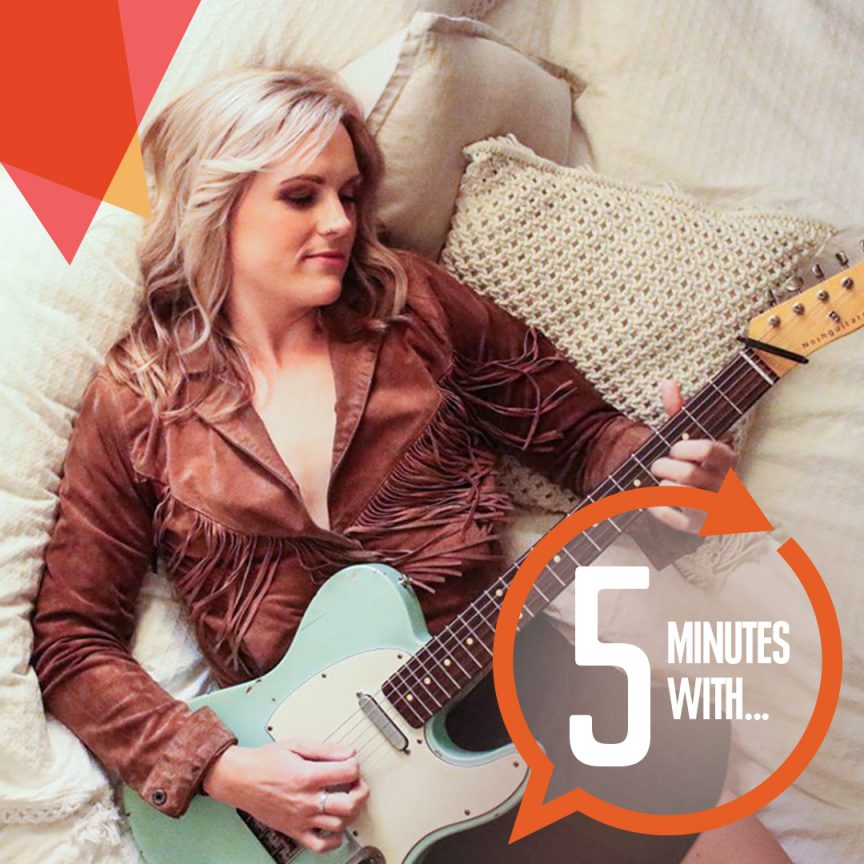 I wanted to play guitar for as long as I can remember, like that was literally all I wanted to do. I also grew up in a Pentecostal church and music was a big thing. I looked up to one of the leaders at children’s Church, Aaron Mab, and he was a mean guitarist and an awesome mentor. I wanted to play guitar like him. My parents finally let me have guitar lessons when I was seven years old and I was in love with it. I would play every single day and sometimes fell asleep with the guitar in my hands.

Stevie Nicks comes to mind. Her songs spoke to me in my 20s when I started to sing. I never paid much attention to the lyrics, until I started to learn to sing the songs. Neil Young was always playing in the house and Dave Rawlings is my favourite guitar player. He plays with Gillian Welch, another excellent and inspiring songwriter.

The first concert I ever went to was Joan Armatrading with my dad at the festival theatre in Adelaide when I was 13. I didn’t really know who she was but she was a great guitarist. It was an experience and I felt privileged to be taken. Safe to say I was the youngest member of the audience. I admired her ability to connect with the audience and could feel the vibe in the room.

I saw Katie Noonan do a show at the Adelaide fringe that incorporated acrobats interpreting the story of each song. There was a stringed orchestra, banjo, acoustic guitar and she played piano. It was amazing, beautiful and breathtaking. I was in tears by the end of it.

I saw Patti Griffin in Sydney at the City Recital Hall just before lockdown in 2020. I’m an Adelaide girl so it was amazing to be inside such a stunning venue, and I was seated 5 rows from the front. The whole concert was breathtaking. She has written songs that many artists have covered so I was not only familiar with her versions of songs but everyone else’s too. You could hear a pin drop in the room between claps and songs. It was just her, a guitarist, a percussionist and her great songs. She is one of my favourite songwriters, and the show was intimate and an experience I cherished going into lockdown about a week after. It changed my approach to music and rekindled my love for it too.

Playing on CMC with Beccy Cole at the awards night in 2016. We were the first ever all female band to play on CMC and be broadcasted live to television. It was one song that Beccy had written for the occasion, “Look ma I’m on CMC”. I was so nervous, we all were, but we killed it and the reaction was amazing. The girls and I celebrated after with a spring to our step. I was so proud and felt like we’d made a positive statement.

Which one… maybe the time I was playing at the Imperial in Maitland and my skirt was stuck in my knickers and everyone could see my bum. I had a patron who kept trying to get my attention to tell me but I just kept playing… I finally stopped what I was doing and she told me, I asked her if it was bad- she said it was pretty bad. I carried on with my gig, red faced and very embarrassed.

I’m working on a couple of gigs I have booked with artists Katie Brianna, Piper Butcher and Chloe Gill. I am playing lead guitar with Katie Brianna and band, and Piper Butcher and band at the Dashville Skyline- Cosmic Country Weekender. Both Katie and Piper are excellent songwriters and musicians. It’s always such a treat to play with these girls. I’m really looking forward to these gigs and am looking forward to doing more shows with these artists.

I have been working with Chloe Gill, a local singer songwriter, and hope to book some gigs with Chloe this year. Her music is very different to the usual alternative country genre that I play a lot of but I am really enjoying her music and song writing style and am blown away by her talent and song writing abilities. I have also started recording an album with one of my dear friends and favourite songwriters, Emily Davis.

We are recording some of her new songs in a stripped back outdoor setting, acoustically and live. I am playing acoustic guitar and singing backing vocals and will be making a few trips throughout the year to Daylesford VIC to complete the work we have started in January this year. I have formed a three piece band and will be working on my own original songs with the intention of doing some band shows around Newcastle, so watch this space.

I was living in Adelaide at the time and was in the process of applying for the South Australian Police Force. I decided it was time for a career change and wanted more consistency in my life. My country music idol was in the audience at an annual Christmas Eve gig I played with one of my Adelaide girl bands, Emily Davis and the Rising Tides, at an iconic music venue in Adelaide, The Wheaty. At the end of the gig Beccy Cole waited until I had packed up and invited me to tour with her in 2016. It was a dream come true and my life changed course over night. I played with Beccy Cole and the band at the 2016 CCM Awards night, which was broadcasted, on national television alongside internationally known artists. We were the first all female band to play live at a CCM awards night, a song Beccy Cole had written for the night “look Ma, I’m on CMC”. We were all very nervous in the rehearsal and learnt the song the day before but nailed it! I felt so proud and on fire. I will never forget that night.

I’d like to work on my original music this year and record an EP. Do some gigs with my own band and be the front woman, which I have never done. I’d also like to continue mentoring young professional musicians. Working on their song writing, guitar skills, stage craft and performance skills and share my industry knowledge with them.

One of my guitar students who I taught from a young age in my hometown of Gawler was 2019 Unearthed High winner, George Alice. Our guitar lessons quickly moved to song writing lessons once I cottoned onto her singing abilities and encouraged her to sing outside of her bedroom and on a stage. I am very proud of everything she’s achieved and continues too. Encouraging young people and helping them on their musical journey is something I am very passionate about.