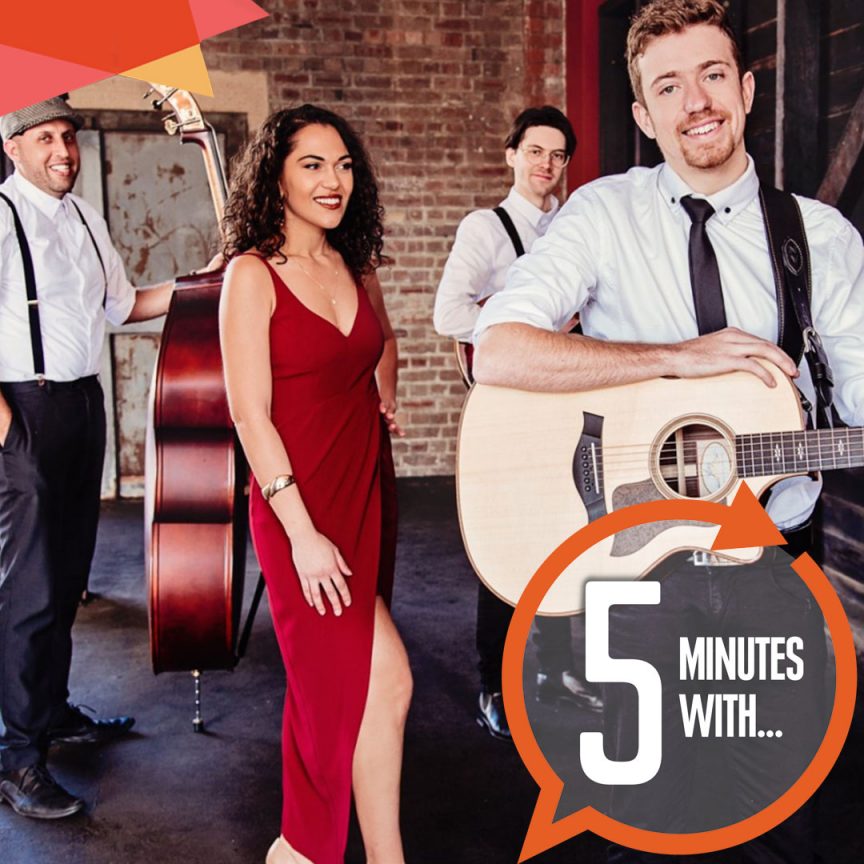 Cristina: My mother taught me to harmonise while we listened to the Beatles on long car trips. Singing was just always what I enjoyed the most and it came really naturally to me, so when it was time to decide what I wanted to study it felt obvious to choose music as a career path, and I’ve enjoyed every minute of it since!

Ned: I am a massive fan of artists who write and perform their own music. It is hard to name just one, my favourites would be Luke Combs, Ed Sheeran and Thirsty Merc.

Cristina: I don’t necessarily have a favourite artist, I think music is such a powerful tool and choosing what I listen to really depends on how I feel in the moment, so you’ll often find that my playlists can range from smooth Hispanic music, to heavy alternative rock.

Ned: Go to artist would have to be Luke Combs.

I actually don’t listen to playlists, I only ever listen to my liked songs which at the moment sits at 10,438 individual songs spanning from modern hits, jazz, country, pop, classics, folk, rock and everything in-between. I hit the randomize button and listen to every song I have liked since my love for music started.

Cristina: Natalie Lafourcade is my go-to artist at the moment. Particularly her album, “Musas”.

Ned: This one was actually in my hometown of Griffith. Australian Band Thirsty Merc came to town and I was absolutely blown away by their musicianship and performance. I instantly went down to the local music store bought a guitar and haven’t looked back since.

Cristina: Big day out in 2011, I was 18 years old and on my first trip away with a friend. Moshing to ‘The Killers’ in 40-degree heat was a moment I’ll never forget.

Ned: This one for me would have to be performing in a little country town south of Paris. Not a single English speaking person in the crowd and seeing everyone dancing, cheering and clapping along was such a surreal moment and definitely showed me just how universal music really is.

Cristina: I wanted to sing a particular song at my Nonna’s funeral; it was an old song that we would sing together that not many people know. Unfortunately I wasn’t allowed to sing this song within the church, but on the weekend following the funeral we were performing at a public local gig, and in the last few minutes we asked if anyone in crowd had a particular request for the last song of the night. A young woman yelled out the name of a song, it just so happened to be the song my Nonna and I would sing together. I was covered in goose bumps and so happy, as it felt as though she was right there with me and I was able to perform the song for her.

Ned: There is only one moment that comes to mind. I was asked to perform for a venue in Sydney however instead of performing in a certain area with my own speakers they asked me to walk from table to table and take requests unamplified. This was one of the toughest and most embarrassing gigs of my life.

Cristina: I was performing a stage show as one of the Supremes and just before I was due to be on stage in my girl group, the Lower part of my dress busted at the seams! My group went on stage as they all had solos within the medley, while my dress was manically being duct taped by my colleagues behind the scenes. I managed to come out on stage just before my solo, and changed the choreography to ensure the crowd didn’t see the wads of black electrical tape on the back of my dress. Luckily no one noticed and I received a “best recovery” award at the end of the production.

Ned: As we are still catching up on all of our weddings and events that were postponed during covid the main focus at the moment is keeping up with enquiries, learning specific songs for events and continually adding to our set list.

Ned: I think the simple fact that I have spent the last 7years being able to perform and do what I love I cannot ask for anything more.

If I had to pick a certain point in my career it would have to be my international tour. Traveling between France, England, Greece, Japan and Thailand were such surreal moments and something I will never forget.

Cristina: receiving consecutive 5-star reviews every year since my band began performing will always be a highlight that I’m really grateful for.

Ned: As a band we are in a really great spot at the moment. We would love to continue performing at all types of events, growing the band name and see as many faces on the dancefloor as possible!

Cristina: It has always been a dream of mine to perform in Nashville, Tennessee. My fiancé and I are big fans of country music and crossing that off of the gig list would be amazing.