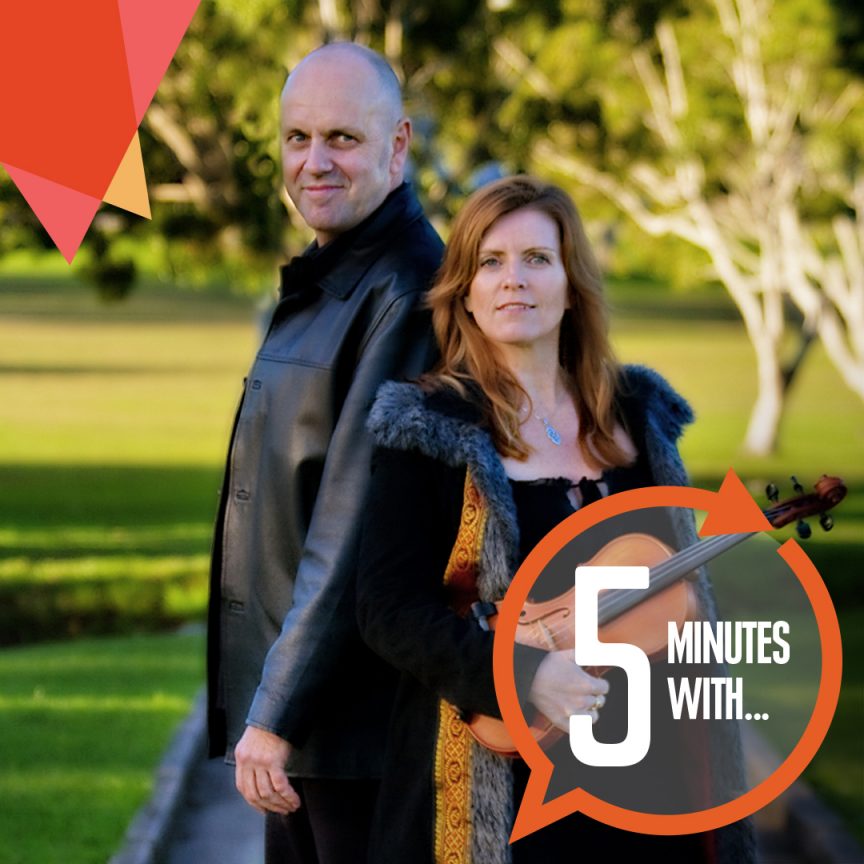 1 – My Dad, who was very musical and introduced me at a young age to the classical giants, the jazz giants and the Beatles – a good start, I think.

2 – Deep Purple. The opening track of “In Rock” – Speed King – was like a nuclear device exploding – I had never heard anything so powerful, devastating, and noisy! It changed my life permanently and forever.

3. The Dominican Nuns, who “taught” me piano for 5 gruelling years, beating the crap out of me whenever I made a mistake. After I completed my 6th grade AMEB exam, I swore I would never touch the piano again (in retrospect, probably a really dumb idea) and would become a debauched, guitar wielding rock god instead. Hmmm…

Sue: I grew up in a very musically diverse and happy household.

I always loved music as a result and was curious to try different instruments at a young age, but the reason I became a full-time musician was kind of by mistake. I got a job as a fiddle player that was advertised in the paper and never went back to Uni to do a Diploma of Teaching to be a language teacher.

Mikey: So many… If I had to pick one it would be Midnight Oil – I am in awe of their political, social, and cultural dedication and they rock like no other band I have ever seen. At the Makarrata concert last year my 20 year old son, my partner Sue and I all burst into tears during their first song – it was a magic and powerful moment. Also, Martin Rotsey has the best strat sound in the universe.

Kate Bush will always be my first love. The potency, intelligence and variety in the music she wrote will never get old. I love old school chic rock singers like the Wilson sisters from Heart too and have an enduring admiration for Classical Art Songs.

Mikey: I don’t do Spotify – its business model is appalling. 0.006 cents per stream – criminal!

My current go-to artist is Dirty Loops (thanks for the tip-off Phil Bellamy). Un-frikkin’-believable!

Sue: Cannot get enough of Nothing But Thieves – thank you Shane Williams!

Mikey: Sherbet before they had their first hit – a free concert in King Edward Park when I was about 12 or 13.

Sue: Eurythmics at the Sydney Ent Cent in 1985. Annie Lennox strutting in a black bustier!

Mikey: I managed to get 8,000 leather-clad aggro bikies to sing, in full voice….. Bob the Builder! Honest!

Sue: Playing for big festival crowds are probably the most exciting gigs I’ve done but I have to say that nothing really beats live theatre in terms of excitement and sense of achievement. I’ve played the Queen of the Night twice. It transports you. I miss it. I think we all do at the moment!

Mikey: Several, but one that stands out is being so nervous that I couldn’t actually get my fingers to stay on the strings of my guitar – horrible.

Made the mistake of having a drag of someone’s herbal cigarette at the Delaney Hotel circa 1994 and felt like someone had put me in a strait jacket for the rest of the night! Hard to play fiddle like that.

Mikey: Recording cover versions of favourite songs with my fellow TAFE teachers – for whom I have the greatest respect and admiration.

Sue: I’m about to start tracking the vocals for the album that is my PhD creative work. Mostly original songs in all different styles. Super challenging and super exciting.

Mikey: Playing my instrumental surf/punk original material at a couple of gigs before the band fell to bits.

Sue: Putting together a mature age original chic rock band with a difference.

Sue: Finishing my PhD and world domination with Hot Flush (yes, it is me…)