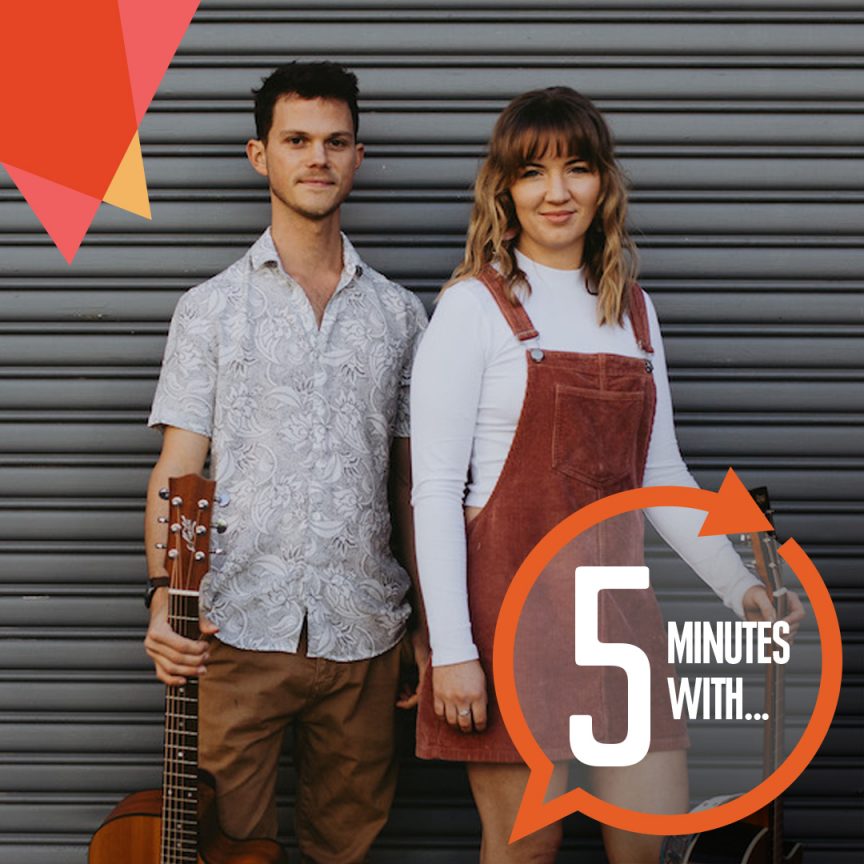 Mike: Music was always on at home while I was growing up and my dad was a huge music lover. He had a big record & CD collection of stuff like Led Zeppelin, Black Sabbath, Hendrix, Silverchair, The Chili Peppers etc. So I was exposed to great music from really early on and I guess that’s what inspired me to pick up the guitar.

Hannah: Ever since a young age I’ve always loved dress ups and performing whether it’s singing, dancing or acting…and when I was five I was given a microphone – a high-five microphone actually! It was my mum who introduced me to a wide range of music; the classic musicals, ABBA, Eagles, Carole King, Ella Fitzgerald, Elton John, Fleetwood Mac, Dusty Springfield… But it was at the 2000 Australian Olympics where I saw Nikki Webster flying and singing at the same time and I was like, “That’s it! I’m going to be like her!” I’m yet to be in a show where I fly though… let’s work on that, eh?

Mike: I’m not sure that I’ve ever had a single favourite artist. Most music that really inspires me is largely improvised. I enjoy musicians that write a song loosely and then each time it’s performed it can go somewhere a little different according to the band members.

Hannah: I’d never ever get sick of Queen, ABBA and Elton John they are not only exceptional musicians but they are so theatrical and I’m all about that. An inspiring contemporary artist is Alice Phoebe Lu she’s a free spirit and experiential with her music I love her crooning too…

Hannah: I go through phases of loving male voices or female voices. At the moment my go to Spotify playlist for male voices is retro pop for some soul and funk…Teskey brothers, son little Ben l’Oncle Soul and Leon Bridges. Otherwise female voices… I’ll have to say Alice Phoebe Lou and Lianne La Havas.

Hannah: Not just Nikki Webster? 😉
I’m not sure if I have one particular one they’re all so different… P!nk concert – I was flabbergasted by, but then also at an intimate bar in Canberra, Matt Corby in an intimate setting where his vocals were just perfect. I cried at Adele and then, well, Empire of the Sun at Southbound Festival was the best festival act I’ve ever seen because they put so much effort into the theatricality.

Mike: Playing a set at my sisters wedding and having so many friends & old friends on the dance floor at the same time.

Hannah: A couple of years ago at the Star Hotel all of our friends were there and a 40th birthday and an 18th and they were all up dancing and singing along that’s what it’s all about. It was also the first time we performed as a romantic couple so there you go.

Mike: My guitar strap coming off mid song.. We regathered pretty well though and could laugh it off.

Hannah: Singing happy birthday in the wrong key compared to the guitar. Most people had quite a few drinks in them so everyone sings in the wrong key anyway but next time I will not accept the drinks given to me because this happened as a result.

Mike: Incorporating the loop pedal into more songs to extend the dance tunes and keep it interesting.

Hannah: At the moment I’m working on my guitar skills to layer our music.. to add depth to our sound. I’ve always been able to hold a tune but I can now hold seven cords and bar cords with different rhythms. Michael is the foundation of the texture rhythm and structure of our duo and I hope to play more guitar to support him in this so that he can be free and improvise more.

Mike: Being able to play gigs outside of the Hunter area and make little tours of it.

Hannah: Oh just being able to play live music along the coast at coastal venues is an absolute dream. But if I were to choose a specific moment it would have to be when dancing was brought back this year and we had three different parties at the Clarendon in a beer garden dancing together and our music was bringing people together for really joyful times – that was exciting

Hannah: We are aiming to play at more private functions.
One day I’d like to be in a full band. Any sicko drummers out there or mysterious bassists, please?