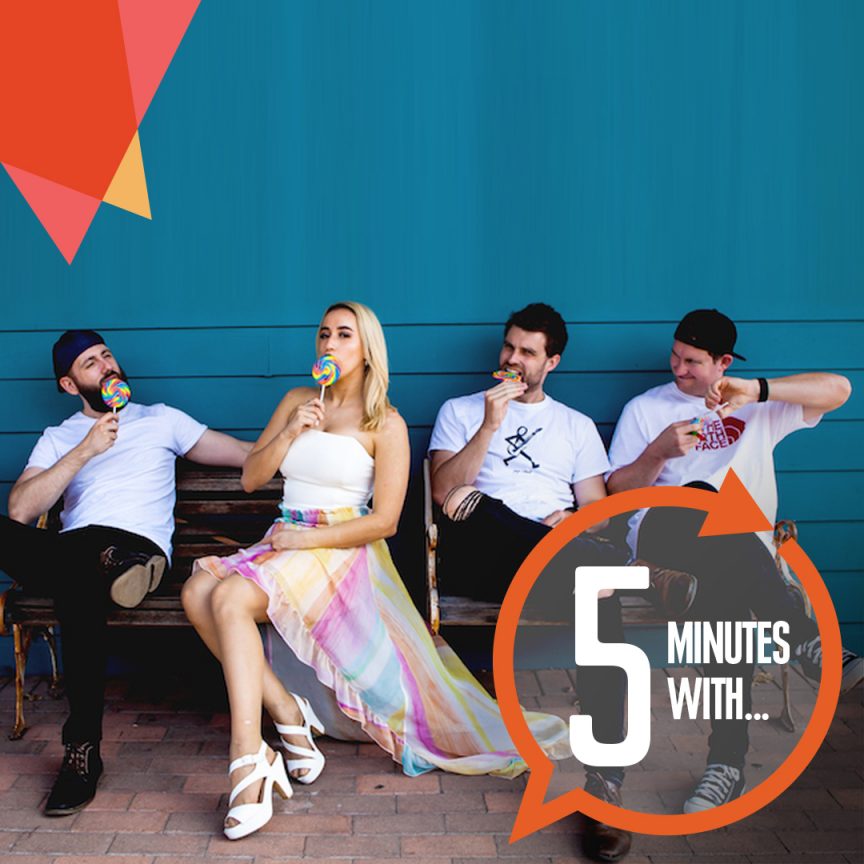 
Chiara: I was exposed to music from a very young age. I was fortunate to have a mum who always encouraged creativity which then lead to music becoming a strong passion. It was my singing teacher Jordie in high school that inspired me to take the leap and join a gigging band!

Jamie: Like every kid at some point I wanted to be a famous rockstar, but what really inspired me to become a musician was the desire to play guitar like John Butler. I also loved writing poems and putting thoughts to paper as a teen, naturally that developed into songwriting once I knew a few chords on the guitar.

Simon: I’ve always been around music and bands since primary school days. It was a stress relief and a chance to make new friends.

Andy: I was always fond of music at a young age as it was always a part of my up bringing. I had a huge appreciation for classical music and later discussed it’s inspiration and implementation in rock music. This then further inspired me to become a musician and songwriter. I started as a percussionist in an orchestra and moved my way into become a multi-instrumentalist.


Who is your favourite/inspiring artist and why?

Chiara: Anyone who knows me is well aware I’m a HUGE Lady Gaga fan. I love how versatile she is across genres, her ethics, voice, costumes, and most of all how little she cares about other people’s opinions!

Jamie: I’m inspired by new artists daily. In the beginning however it was all John Butler. His guitar skills and lyrical prowess really inspired me to become a songwriter.

It goes without saying John Mayer is also very high on my list of inspiring artist for the same reasons above!

Simon: Don’t have one particular, I source inspiration from many artists. I take what I like from them and adapt them to the band.

Andy: My inspiration draws from a fair few artists. For people who know me, I always say Muse due to their fusion of rock and classical music. I find them to be inspiring especially in their early years due to the complication and sophistication in their song writing.

Chiara: My go-to playlist at the moment is Emo Classics. I swear mum, it’s DEFINITELY not a phase.

My go-to artist would probably have to be John Mayer (John Bae-yer).

Jamie: John Mayer currently and playlist wise it has to be something nineties or naughties.

Andy: Prog rock music, been listening to plenty of dream theatre and symphony X. Again, the fusion of orchestral elements and metal. The epic and wall of sound that produces I absolutely love!

Chiara: Definitely Green Day. I was a HUUUUGE Green Day fan as a teen. All the emotions, screaming, and headbanging in the sweaty mosh pit was everything I needed at 14.

Jamie: Powderfinger 2003 at the Newcastle Entertainment Centre. John Butler was the opening act… that’s when the journey to becoming a musician started for me!

Simon: Pirates of Penzance – John English version when I was a kid

Andy: Biffy Clyro is amazing live. Huge sound for a small band. Very tight and powerful. I saw them twice and each show was amazing.

Chiara: Every gig I get to do with my friends is an amazing moment. I consider Soundabout family and am very lucky to play with them.

However I would also add that an amazing gig moment would definitely be when we had a lady come up and ask us to sing a song for a late friend. He was a regular at the pub and everyone joined in to sing for their friend that had passed away. The lady who requested the song cried when she hugged and thanked me at the end. Needless to say, I cried too. It’s moments like these that make me love my job.

Jamie: Playing to over 600 people on a Tuesday night at a local hotel with Soundabout is very high on the list. The hotel was packed to the rafters!

Some pretty special wedding moments also. Like playing the Friends theme song for Ross and Rachel as they entered their reception!

Andy: When I finally realised that the bands I’m in have potential and are starting to be recognised to the public eye.

Chiara: Would definitely be when one of my skirt zippers broke. Luckily I always carry safety pins, hairspray, a whole makeup touch-up kit, and the kitchen sink with me at gigs.

Jamie: Forgetting my own lyrics… one or two times, haha.

Andy:  Have never had one, always professional…

Chiara: I’m working on my accompaniment skills. Even though I’ve played piano since I was 4 I gave up lessons in my early teens and self-taught myself for far too long. Now I am working on getting my keys skills up to scratch to hopefully bring some epic new songs to Soundabout’s repertoire.

Jamie: Andy and I have finished an originals album with our band Lunar Umbra, so we are working on releasing that. I’m also writing new tunes and building ideas for the next album. Other than that I have been further developing my bass playing skills, still trying to nail a solid slap bass technique.

Simon: I’m working on building stick independence. Building the ability to have four independent rhythms happening at the one time

Chiara: Joining the EAO family was definitely a huge milestone for little ole me. I knew it meant we would be able to work with some amazingly talented local musicians!

Jamie: Writing, recording and releasing original music. There is nothing quite like being on stage and seeing people in the crowd sing along to your tunes. It goes without saying starting Soundabout with my best mates in 2014 is also a huge milestone.

Andy: Releasing a catalogue of original music and recording most of it in the confines of our own homes and studio. A fun and exhausting experience

Chiara:  I would love to collaborate with some more of Newcastle’s amazing creatives. I’ve been fortunate enough to work with some already and can’t wait for all the adventures that lie ahead!

Jamie: I would love to have an original song break into the charts sometime, definitely a work in progress. I’d also love to collaborate or write with some other local or famous artists… Dave Grohl or Ed Sheeran will do.

Simon: I haven’t thought of any at this point.

Andy: To have success in original music.