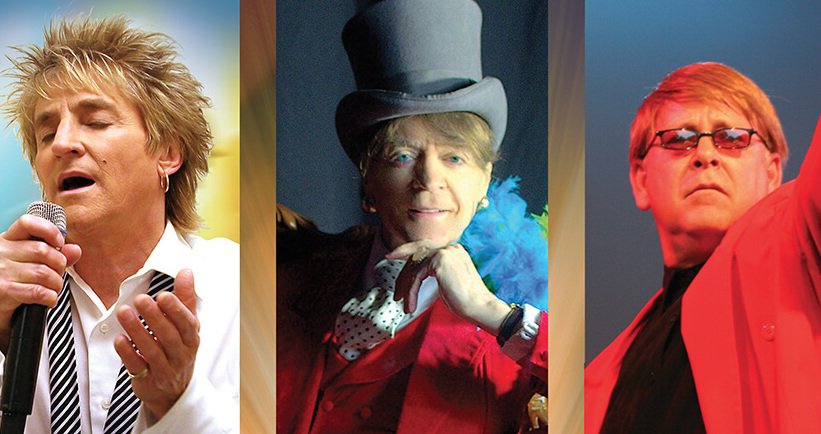 Get ready for the best ‘British Invasion’ of all time! There’s a new show on the road and if you are a fan of David Bowie, Elton John or Rod Stewart you simply can’t miss it.

This high quality tribute act utilising the phenomenal talents of the best performers in the business is coming to the 16s on Saturday 24th June. Promising a once in a lifetime chance to see the superstars and legends of British rock perform not only all your favourite hits, but together, the tour will also feature a band worthy of such legends.

ROD STEWART performed by Rob Caudill: Rob Caudill has spent 15 years in Las Vegas performing his high energy, critically acclaimed, international tribute act. All his life people told him he looked and sounded like Rod so when it was suggested to him by Joe Walsh of The Eagles that he give it a shot, he did and has never looked back. Audiences believe its Rod on the stage with women screaming themselves hoarse in appreciation!
“…Robs voice and look is unbelievable. It is like looking at Rod Stewart himself” John Entwhistle of “The Who”.

DAVID BOWIE performed by Jeff Duff: Jeff Duff has performed Bowie in a number of hit shows such as Ziggy – The Songs of David Bowie, Bowie Unzipped and Ground Control to Frank Sinatra and never fails to delight Bowie fans. With an international career spanning decades, Duff is the obvious choice to play David Bowie – an androgynous, gender bending skinny white guy with a fabulous baritone and enormous talent. He’s been entertaining Australian audiences for decades since Kush in the 70s, the Jeff Duff Orchestra and now in his Bowie shows.
“Sinatra, Presley, Jagger, Popeye and now Duffo” – Andy Warhol

ELTON JOHN performed by Elton Jack AKA Lance Strauss: Elton Jack is the world’s best known Elton John Tribute act and has been wowing his audiences for more than 25 years in over 15 countries. Millions of people all around the world have been entranced by Elton Jack’s tribute to the music and lyrics of Elton John and Bernie Taupin and amazed at the uncanny resemblance. Lance himself is a very successful musical theatre performer whose appearance on Hey Hey It’s Saturday as Elton John started the ball rolling and Elton Jack was born.
“Unquestionably, Lance is the real deal” – New Zealand Herald

British Invasion will showcase the best of British Rock from the 70’s and 80’s in a spectacular stage show featuring many of the most beloved and favourite songs of all time. Appealing to young and older audiences alike there’ll be something there to delight everyone. With an incredible line-up of talent that will have you believing that you’ve seen Bowie, Elton John and Rod Stewart together in a concert of supernova proportions.

Show only tickets for British Invasion are now on sale online and from the Club for $35 with Dinner & Show tickets available for $70.