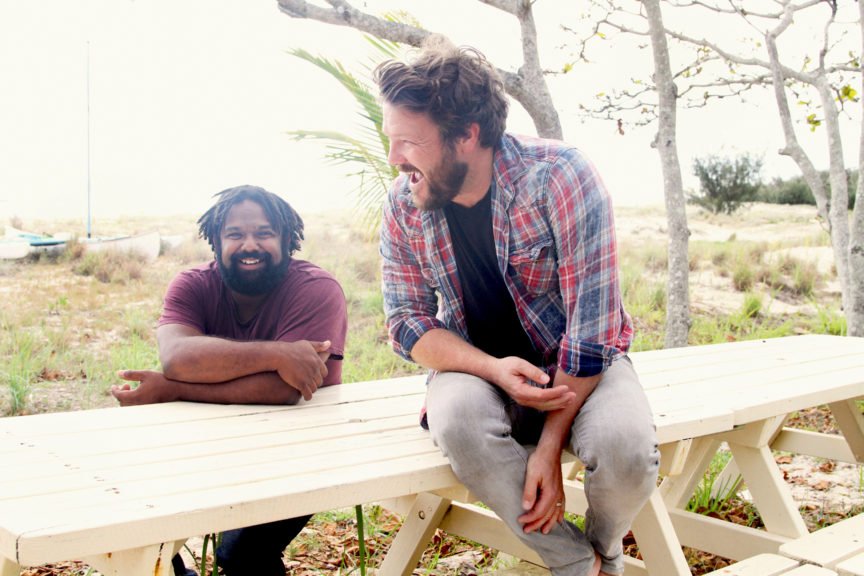 There’s a potent chemistry that drives Busby Marou, a bond struck between two mates years ago in the corner of Rockhampton’s Oxford Hotel, when they happily knocked out tunes for hours on end to anyone who would listen. And it’s that unwritten agenda, a simple intangible understanding between them, that they have come back to in order to shape an exciting new chapter in their remarkable career.

“There’s something special about Busby Marou,” says Tom, the songwriting hub and lead vocal of the duo. “At the bottom of it all it’s two blokes singing with harmonies and a bit of storytelling.”

That’s how it was at the start of Busby Marou’s recording career, those delightful harmonies blending with understated guitars on their debut EP The Blue Road.

Their third album Postcards From the Shell House was recorded with Jon Hume (Evermore) at The Stables studios in Gisbourne, VIC as well as during sessions on Great Keppel Island and on a boat. Postcards From The Shell House returns the pair to their roots in a number of ways. The shell house in question, an old heritage-listed building on Great Keppel Island off the coast of their native Rockhampton, has great significance. Early in their career Tom and Jeremy would sit around a campfire there and sing songs, one or two of which ended up on record. Last year, with producer Jon Hume in tow, that same method in the same location produced a few songs for the new album.

Busby Marou’s debut self-titled album was certified ARIA Gold in Australia in July 2014, while their follow up album Farewell Fitzroy debuted at #5 on the album chart. Postcards From The Shell House is Busby Marou’s first ARIA #1 album.

“….from some of the sweetest harmonies the pair has committed to record to percussive claps and captivating refrains…Postcards From The Shell House is Busby Marou’s most consistent release to date and positions the duo to capitalise on their already considerable success.” Four Stars – The Courier Mail

“If Busby Marou’s third album Postcards From The Shell House was any more laid-back, it would be upside down” – West Australian