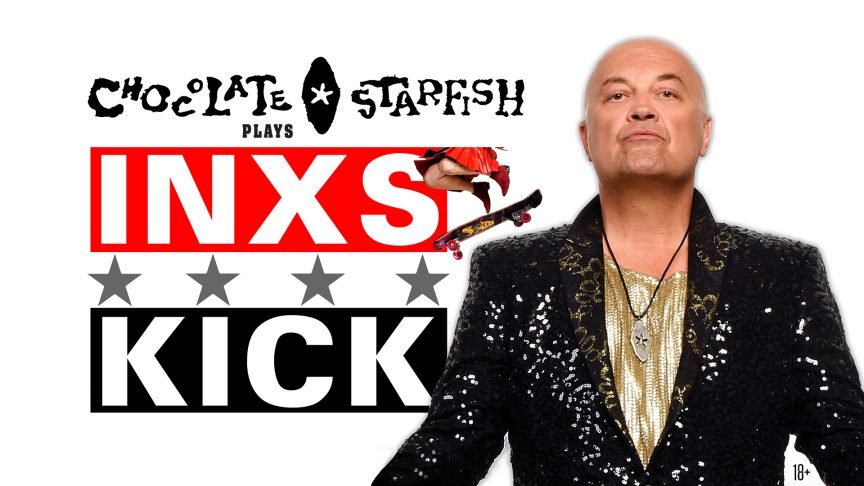 Chocolate Starfish proudly announces the next cab off the rank of its Classic Albums Series: ‘KICK’ by INXS. With their powerhouse performances and magnetic stage presence, the ‘Fish are a perfect fit to bring this much-loved album to the stage.

Starfish burst onto the charts in 1993 with their classic cover of Carly Simon’s You’re So Vain. It was the only cover the band recorded. A string of hits followed, including Mountain, Four Letter Word and Accidentally Cool.

Starfish was loud, brash, a bit tongue-in-cheek … did I mention loud? And, above all else, a band that always delivered. The five of us honed something pretty special back then during the Greville Street days in the ’90s, and, nearly 20 years on, I can’t wait to rekindle some of that spirit, and once more plant a tongue into the Starfish cheek. Norman Falvo

The band never officially broke up. There was no announcement or farewell tour. “We simply stopped playing in 1997,” drummer Darren Danielson says.

It’s understandable that they were a little tired. Chocolate Starfish was Australia’s hardest-working band in the ’90s, playing more than 700 gigs between 1993 and 1997, once doing 22 nights in a row.

The Starfish days … Well, where do I start? Far too many fond memories. From gigging in Newcastle at the Star Hotel – cooling myself down in between songs in a dirty slime-filled pond; even drinking from it, followed by a quick chunder – to driving straight after the gig to Brisbane, with myself driving and all the other guys asleep in the back of the Tarago. I thought I would pull up for a nap, only to find in the morning that I should have pulled to the side of the road and not parked in the middle of the left-hand lane with semi-trailers zipping past us – not the smartest move on my behalf! I’m looking forward to playing with these guys again – we all go back a lot further than just a band of guys playing together. We had a magic there that is hard to explain and I’m looking forward to experiencing that Starfish magic again. John “Stones” Nixon

Chocolate Starfish was a band that never fitted the mould. “You wanted me to be a mountain,” Adam sang in their biggest hit, “I’d rather be a river.” Starfish landed smack-bang in the middle of the grunge era. They had just one rule: no denim and no black T-shirts.

“In singer Adam Thompson, the band possessed an entertaining frontman who lent the music an air of much-needed theatricality and melodrama” – Ian McFarlane, The Encyclopedia of Australian Rock And Pop

One critic called Adam – the dairy farmer’s son from Tallygaroopna – “part Yul Brynner, part man-eating boiled egg”, adding that a Starfish gig was like “a crazed aerobics session”. And another critic wrote in style magazine Black+White, “If there’s an audience, he’ll play up to them, if there’s a balcony, he’ll climb it, if there’s energy in the room, he’ll milk it.”