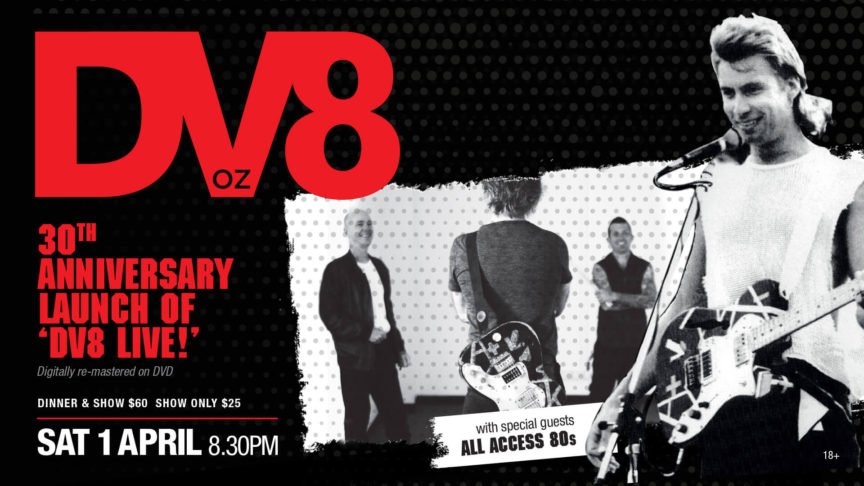 Were you there..? April 1987 was an iconic moment in time for legendary Newcastle band DV8. At the height of their popularity the band did 2 final shows packing out the auditorium of Belmont 16s both nights.

The music from these shows was recorded on a double album “DV8 Live!”and also filmed for a limited edition VHS. The sound was recorded and mixed by Kevin “Caveman” Shirley who later went on to produce Silverchair’s “Frogstomp” and albums by Joe Bonamassa and Cold Chisel amongst many others.

The video which captured a massive audience dancing and singing along to DV8’s best songs with Greg Bryce on guitar/vocals, Brett Reid on bass/vocals and Brad Heaney on drums (later with Screaming Jets/Radiators), has been digitally re-mastered and enhanced for DVD and will be launched at Belmont 16s on Saturday April 1st 2017.

Whether you grew up with DV8 in the 80’s or have come to know them more recently since the release of new album “Like It On Top” this will be a magical night to celebrate. “All Access 80s” will be special guests along with some high profile musicians like Grant Walmsley doing guest spots with DV8.

Show only tickets for DV8 are now on sale online and from the Club for $25 with Dinner & Show tickets available for $60. [Online purchases may attract a booking fee] BOOK NOW