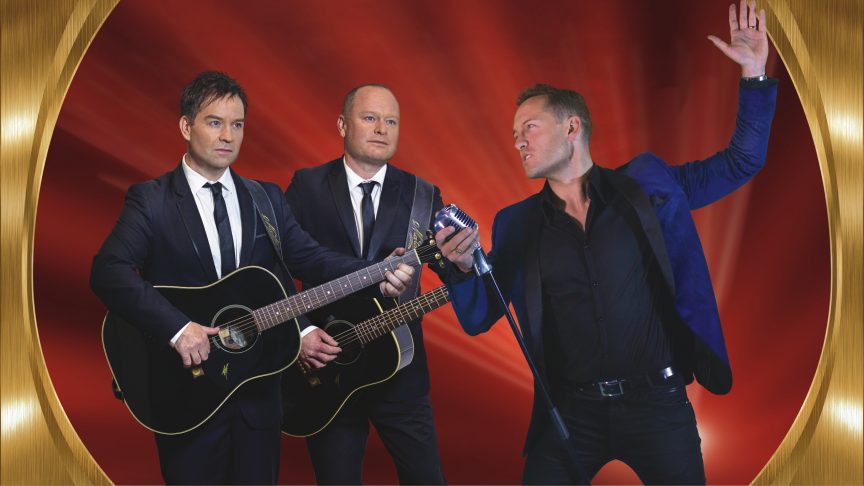 Internationally renowned The Robertson Brothers along with Simon Brook McLachlan from the hit musical Jersey Boys bring you one of the best-hit shows of the year – celebrating the classic hits of The Everly Brothers along with Frankie Valli & The Four Seasons.

Described as the show that rock n roll fans have been waiting for, Australians will embrace and celebrate all the classic hits of these music legends. The magical sounds of The Everly Brothers, Frankie Valli & The Four Seasons come alive again with Australia’s very own multi-award vocal harmony duo and rockin’ live band.

The Robertson Brothers are one of Australia’s leading vocal groups and have sold over half a million records, won 22 MO and ACE Awards, and received two ARIA and Golden Guitar nominations. The Robertson Brothers have toured the world extensively with many well-known acts including The Eagles, America, John Denver, and the Electric Light Orchestra. They’ve also performed at the Opening Ceremony of the 2000 Sydney Olympic Games and many people will recognise their distinctive sound from the theme song for the hit TV soapie Home & Away. The Brothers also perform regular political and football song parodies for Ray Hadley’s morning shows that are networked across Australia and on 2GB.

Simon Brook McLachlan is a Sydney based artist and is a graduate of the National Institute of Dramatic Art (NIDA). Simon is trained in theatre, television, film, music theatre, voice-acting and singing. McLachlan is best known for his work with the Jersey Boys however, he has also starred in a number of other productions including The History Boys at Sydney Opera House, in the world premiere of ATOMIC and Squabbalogic’s Grey Gardens in Sydney. His on screen work includes The Pacific, Underbelly Razor, Black Comedy and the upcoming Australian premiere of Alex Lykos’ A Long Night.

Performing Frankie Valli and The Four Seasons hits like Oh What a Night, Sherry, Big Girls Don’t Cry and Can’t Take My Eyes Off You, The Robertson Brothers & Simon McLachlan present the classic hits with soaring harmonies and incredible musical ability.

This internationally acclaimed production will have audiences dancing in the aisles and begging for more!