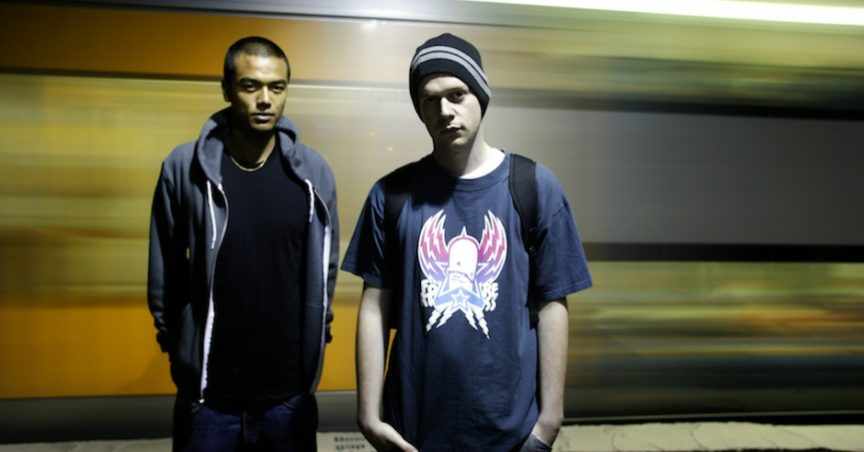 Horrorshow are a hip hop duo from Sydney, Australia, comprised of Solo (Vocals) and Adit (Producer). In eight years they’ve released four studio albums; sold-out numerous tours; and cultivated one of the most loyal and dedicated fan bases.
Emerging in 2008 with an album largely created in high school, Horrorshow signed to Elefant Traks and released The Grey Space. It received immediate industry recognition with an ARIA nomination and a run of support slots on national tours. A year later they released Inside Story, solidifying their reputation for eloquent lyricism and soulful production; their musical maturity defied their young age. Their honesty and musical ingenuity amassed a fast growing legion of passionate fans, and saw them venture for their first European shows.

By 2011, they’d become the go-to act for the biggest tours in the country, supporting the likes of the Hilltop Hoods and Bliss n Eso, as well as establishing their own rock solid live reputation. Every headline show they’ve ever done in their hometown (Sydney) has sold out.

Their third album, King Amongst Many, dropped in 2013 and landed at #2 in the ARIA (Billboard) charts; going on to be nominated for the J Award, ARIA Award, and a shortlisting in the Australian Music Prize. It was a testament to a group that pour their heart and soul into the crafting of an album, that they can achieve such success without hit singles.

In the middle of 2014, Horrorshow, as part of the One Day collective, released Mainline. It debuted at #2 on the ARIA Chart, and the crew toured nationally, announcing themselves as a force to be reckoned with. At the same time, their One Day Sundays parties expanded nationwide becoming one of the most popular events in the country.

Before beginning work on album #4, Horrorshow returned to rework their live show into an acoustic performance, selling out the nationwide ‘Listen Close Tour’ and unveiling the versatility and musicianship of their talents.

The collaborative experiences in the One Day project, combined with the explosion of One Day Sundays, has invigorated this inspired duo with a fresh approach for album #4, titled Bardo State and recently released on Feb 24.