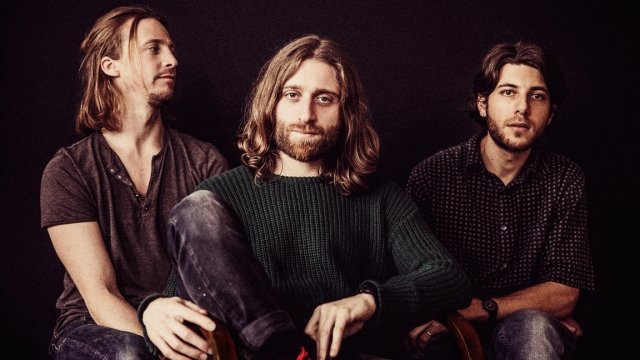 With the release of their new album Punchbuzz little over a month away, Husky today bring news of a national tour to fans and share the visionary video for their current single ’Ghost’.
Following on from popular first single ‘Late Night Store’, ‘Ghost’ has enjoyed a warm welcome into the world. It was premiered via triple j’s Veronica and Lewis along with Clash Music in the UK, and has since received airplay at triple j and double j, amongst a host of additions to Apple Music and Spotify playlists. The rhythmic, driving song sets the scene for Husky’s third album Punchbuzz, out June 2.
The impressive, cleverly animated video was produced by Melbourne production house Dropbear, and sees Husky and Gideon entering a dreamlike and surreal Day of the Dead inspired realm. Director Jonathan Chong was inspired by the song’s evocative lyrics.
The idea came from my interpretation of the song. I wanted to do something relating to ghosts and spirits and thought that a Day of the Dead theme would tie in nicely. The icons and imagery associated with the Day of the Dead festival are really colourful and bold, which gives the animation the vibrancy I was aiming for, whilst also having some dark undertones. It’s a celebration of the departed in a way that is joyous, rather than a morbid celebration. The clip is animated as though each frame has been made from cross-stitch or a Mexican textile. – Jonathan Chong, Dropbear
Shaped by the duo’s recent experiences, Punchbuzz sees the band swapping their signature folk sound for streamlined indie rock that lopes ahead with widescreen atmosphere, dark lyrics, and newly muscled melodies. Sharp, lean, and driving, the album more than lives up to the dynamic imperative of its title.
The Punchbuzz tour will see Husky perform in full band mode, taking the album’s multi-layered sounds to audiences in metro and regional locations nation-wide. The band’s smaller, east-coast run of shows at the tail end of 2017 all sold-out. Supporting Husky on the run will be Mackay based singer/ songwriter and triple J Unearthed alumni Tia Gostelow, and up-and-coming Sydney based band Hot Spoke. Tickets are on-sale now.
Punchbuzz is out June 2 and available for pre-order via www.huskysongs.com.  It will be released via Embassy of Music (Bjork, Robyn, Asgeir) in the UK and Europe and through fellow indie Nevado Music in the US.

* Over 18’s only. Minors are permitted with a legal guardian. Maximum of 3 minors per legal guardian. All minors must hold a valid ticket. Not suitable for children under 15 years of age. Shows may contain explicit content. * Photo ID is essential, acceptable ID is a current and valid Australian Photo Drivers Licence or Passport. Please check with the venue for any other acceptable forms of photo ID * Intoxicated persons will not be admitted * No thongs or steel cap boots * The venue reserves the right to refuse admission to any person * Dangerous behaviour including Crowd Surfing, Stage Diving, Moshing and Violent Dancing is not allowed and will result in your immediate removal from this venue.*Inappropriate behaviour at this venue will lead to your banning.* Please contact all venues direct re wheelchair and any other accessibility concerns*